We have a special evening to look forward to. There is no need to introduce the 70-year-old Iván Fischer to the Budapest audience. Nevertheless, this concert will be an introduction in a certain sense, since it has always been at the helm of the Budapest Festival Orchestra that we've seen him perform ever since the ensemble made its debut on Christmas Day in 1983. For us, Fischer and the BFO are practically synonymous. At this event of the Bridging Europe Budapest-Berlin festival, however, the conductor will be leading the orchestra whose music director he also served as - in parallel with his work with the BFO - between 2012 and 2018.

The Konzerthausorchester Berlin was founded in 1952 in what was then East Berlin. The orchestra's golden age came under the leadership of the legendary Kurt Sanderling between 1960 and 1977. Later on, a series of other topnotch conductors took the podium in front of the ensemble, with Günther Herbig, Claus Peter Flor, Michael Schønwandt, Eliahu Inbal and Lothar Zagrosek serving as Fischer's predecessors. In 2019, he was succeeded by Christoph Eschenbach. The concert's soloist, Mirijam Contz...en, is a German-born German-Japanese violinist whose biography also features a Hungarian connection: between 1984 and 1988 she studied under Tibor Varga. While the Budapest Festival Orchestra is naturally Fischer's greatest source of pride, he has since the beginning of his career also taken the stage with other orchestras and opera companies at numerous places around the world, serving as music director of the Kent Opera (1984-1989), the Opéra National de Lyon (2000-2003) and the chief guest conductor of the Cincinnati Symphony Orchestra (1990-1995). Dating from 1806, Beethoven's Violin Concerto is perhaps the most important piece of its genre ever written for the instrument. Mendelssohn's Scottish Symphony, premièred in 1842, immortalised travel experiences in painterly fashion and with a richness of atmosphere. 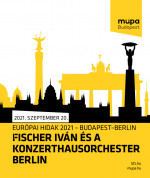