'Iceland's Glenn Gould,' the New York Times wrote. 'A breathtakingly brilliant pianist,' a critic from Gramophone enthused about his playing. A journalist from Le Monde praised his 'volcanic temperament, great virtuosity, a taste
for challenges.' From his portrait, the face of a refined and intellectual artist gazes forth. Born in Reykjavík in 1984, Víkingur Ólafsson has a name that would have sounded unfamiliar just a few years ago. Today, the industry and audiences hold him to be one of the outstanding performers in the international community of musicians.

He grew up in the city of his birth, where he also began learning piano. Like so many major musicians, he was born into a family of musicians. His first tutor was none other than his own mother, a professional piano teacher. The young talent's upward trajectory did not stop until he reached New York, where Ólafsson became a student at the world-famous Juilliard School of Music, studying under Jerome Lowenthal and Ann Schein. His unique talent is illustrated by the fact that he not only has absol...ute pitch (in addition to being able to identify the role played by a given note within a musical context, he can also unerringly recognise its precise pitch: E, F sharp and C sharp, for instance), but also possesses synesthetic hearing (as Alexander Scriabin had), whereby his brain associates tones with colours: F minor appears to him as blue, A major is yellow, and B major is purple. Over the past decade, his playing has conquered the concert halls of Europe and America at breakneck speed. His musical preferences are colourful, his interests broad: Ólafsson's records feature Bach, Beethoven, Schubert, Chopin and Brahms alongside the music of Philip Glass. His album released in 2020 matched Debussy with Rameau. At Müpa Budapest, he will interpret works by the masters of the 18th century, C. P. E Bach, Haydn, Cimarosa and Mozart. 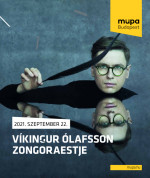