This production by Gábor Goda offers a fresh interpretation of the questions, aphorisms, topoi, sutras and myths that have arisen and have been explored in the course of years of artistic work. As it follows up on fragments of creation jettisoned along the way, the production is informed by the essentials of the spirit of Artus's artistic credo, while it also allows the creators to summarize their achievements as humans and professionals, as well as to open new directions.
The concert: A c...anon of rain washing over the stage makes waves in unison with the sound of a 17-strong chorus.
The dance: The martial art of Tai Chi - flow, calmness, and the clean and precise reflection and counterbalancing of opposing forces.
The theatre: An imagined dialogue between Heraclitus and Goda - in the language of Artus.
Interference between three disciplines: A single movement, a single sound and a single image in constant flux. 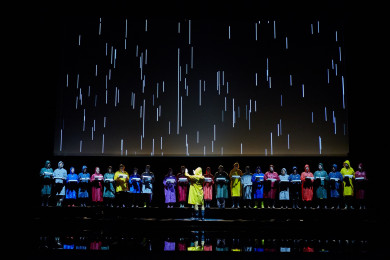