Why can't two very different worlds enjoy each other's company? This is exactly what will happen at this two-part evening with the Ballet Company of Győr: The ethereal beauty of the minimalist choreography by the group's artistic director András Lukács was inspired by Stravisky and will be followed by László Velekei's grandiose narrative balett that attests to the power of magical realism. The classical and contemporary, the beautiful and coarse, the harmonious and dissonant do not cancel each other out, instead they complete one another to provide a full picture of our world.

Of the major provincial dance troupes, the Ballet of Company of Győr has one of the most prestigious legacies. Under the direction of László Velekei and András Lukács since 2020, the company considers tradition and innovation to be an inseparable duality in its commitment to updating the means of expression on the dance stage. The Movements to Stravinsky / Mimi programme is expected to be an important milestone on a long journey. András Lukács introduced the piece inspired by the music of Stravi...nsky with the ballet company of the Vienna Opera House in 2017, earning outstanding reviews. The core of the symphonic ballet is provided by the Serenata from the ballet Pulcinella, but after the choreographer identified this central element, many other works from the composer's broad ouevre practically presented themselves to him. Commedia dell'arte and the visual elements of the Renaissance supplement reserved movements that are exciting precisely for their disciplined nature. The point of departure for László Velekei's Mimi is Menyhért Lengyel's now-classic story, the best known reworking of which is Béla Bartók's The Miraculous Mandarin. The choreographer retells the familiar story in a bold setting: the reality of the dirty underground station is juxtaposed against a dream world that carries the desired into a heavenly state of euphoria. And the object of desire is, of course, Mimi. 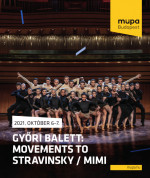